Prior to concluding this agreement, Sojitz acquired the first certification for on-site generators (certification registration number shiyaku A-1) from the Japan Water Works Association’s Quality Certification Center on April 16, 2009. The RIO Grande is a device that can safely supply sodium hypochlorite, a water disinfectant, at water filtration plants, pools, spas, and other on-site locations.

The RIO Grande uses only water, electricity, and salt to generate sodium hypochlorite through electrolysis of brine with special electrodes. The RIO Grande was commercialized in 1994 and marketed by MIOX and is used in a wide range of applications including disinfection of water, sewerage, pools, and spas, beverage bottle washing, and elimination of biofilms in cooling towers. There are currently about 1,700 installations in operation around the world.

【The Process of Making Sodium hypochlorite】 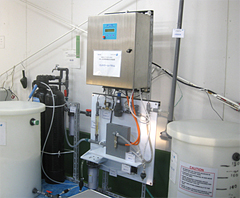 【The RIO Grande chemical generator for water treatment use】


Features of the RIO Grande Generator