Sojitz Begins Development of Tuna that Can Prevent Adult-Onset Diseases

Tokyo University of Marine Science and Technology discovered the effects of certain substances in rice bran and established the technology for using it in fish feed. Rice bran contains oryzanol, which has been discovered to have effect of preventing adult-onset diseases by raising the lipid metabolism of animals. University researchers also discovered that fish are several thousand times more efficient as absorbing and accumulating oryzanol than mammals.

Efficient cultivation of fish is possible by having the fish ingest oryzanol. Oryzanol raises lipid metabolism and increases the efficiency of conversion of feed into protein. Fish that ingest oryzanol are able to convert fat into energy more efficiently than conventionally-raised fish, so they grow without the need to reduce stored protein any more than necessary. This effect has already been confirmed with yellowtail and rainbow trout, and it is expected that the cultivation period can be reduced by about 20% with the same amount of feed as has been used until now.

Sojitz, focusing on the adult-onset disease preventive effects and the cultivation acceleration affects, determined that oryzanol can be used in feed for bluefin tuna. Sojitz Tuna Farm Takashima Co., Ltd. (Matsuura City, Nagasaki Prefecture), a subsidiary of Sojitz Corporation, was selected by the New Energy and Industrial Technology Development Organization (NEDO) for a Grant for Technological Development by R&D Venture Businesses Program. Sojitz Tuna Farm Takashima plans to begin shipping products in the autumn of 2011.

* Oryzanol is a highly safe plant-derived substance that is found in rice bran. It exhibits anti-type 2 diabetes effects by promoting the secretion of anti-diabetic hormones and also has anti-inflammatory effects by gently inhibiting activation of NF-kB a transcription factor that is closely related to inflammation and improves impaired live functions caused by alcohol ingestion. (Excerpted from the Tokyo University of Marine Science and Technology Web site.)

Sojitz Tuna Farm Takashima began bluefin tuna cultivation in the waters near Takashima in Matsuura City, Nagasaki Prefecture in October 2008. Currently, approximately 5,000 bluefin tuna that are 70 centimeters long and weigh 9 kilograms are being raised. A new fish preserve will be established this autumn and 5,000 additional bluefin tuna added. 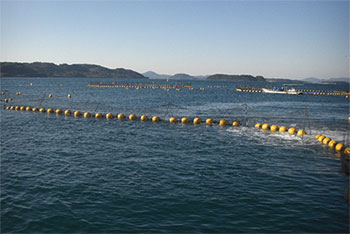