Sojitz Corporation and Toshiba Corporation jointly received an order for two 600 MW class steam turbine generators worth a total of approximately 11 billion yen from Hanoi-based LILAMA Corporation for use at the Vung Ang 1 Thermal Plant, a coal-fired thermal power plant located in Ha Tinh Province of Vietnam. LILAMA, a government-managed construction company, is appointed as the engineering, procurement, and construction (EPC) contractor by Petrovietnam, a government-managed oil & gas development company who is the owner of the power plant.

The order was given in consideration of Sojitz’s outstanding track record in Vietnam and Toshiba’s advanced technological capabilities, the reliability of its products, and its excellent reputation in the United States and many other countries around the world. This is Toshiba’s first order for thermal power plant in Vietnam. Sojitz and Toshiba plan to deliver the turbine generators in stages by November 2011 and for the power plant to begin operating in 2012.

Vietnam is currently enjoying rapid economic growth and plans to increase electric power generating facilities by approximately 30,000 MW over the six years to 2015. Because Vietnam produces coal domestically, more than half of the increase will be coal-fired thermal power plants, and the Vietnamese government plans to increase the percentage of coal-fired plants threefold from the current levels to about 45% of the total by 2015. Vietnam plans to construct a large number of 600 MW class power plants, and the Vung Ang 1 Thermal Plant is attracting attention as the first such project.

Sojitz has extensive experience in Vietnam improving hydroelectric power plants, delivering power generation facilities, and obtaining orders for transformer facilities including investment in Phy My 3, an IPP project. Sojitz will continue to focus its efforts on projects that contribute to the development of Vietnam’s infrastructure in the future.

Details of the Order 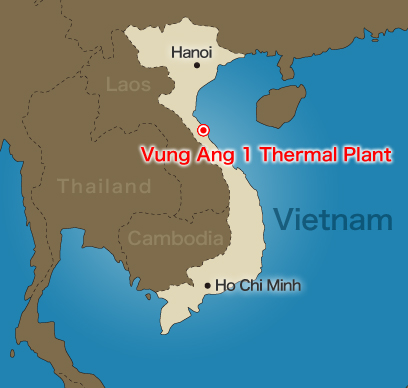