Sojitz Corporation has received an order for a cold rolling mill for use in what is planned to be Malaysia’s very first stainless steel cold rolling plant. The facility is currently under construction in the Jahor Bahru region of Malaysia by major Spanish stainless steel producer ACERINOX S.A. (headquartered in Madrid, Spain) and Nisshin Steel Co., Ltd. of Japan. The value of this order is approximately 5 billion yen, with Sojitz teaming up with Mitsubishi-Hitachi Metal Machinery Inc. (headquartered in Minato Ward Tokyo; Yasukuni Yamasaki, president) in a turnkey basis contract covering the delivery and installation work of the machinery.

The extended plan is for Bahru Stainless Sdn. Bhd. (headquartered in Jahor Bahru), a joint venture between ACERINOX and Nisshin Steel, to advance sales of the stainless steel plate and sheet produced at the plant to automotive, consumer electronics and building materials concerns in Southeast Asia. Bahru Stainless is also thinking in terms of future expansion of the plant into an integrated stainless steel works with annual production capacity of 1 million tons. As the first stage of the project, approximately 30 billion yen will be invested to construct a stainless steel cold rolling plant with total annual production capacity of 240,000 tons (180,000 tons of that being cold rolled stainless steel). The facility is scheduled to commence operations at the beginning of 2011.

Sojitz has landed an order of a 20HI SENDZIMIR type cold rolling mill for which Sojitz holds the sales and manufacturing licenses. The cluster type roll structure enables this mill to roll stainless steel and other hard materials with high roll separating force. Another distinguishing characteristic is high control capacity that facilitates production of top-quality stainless steel plate and sheet. The cold rolling process is a critical stage that exerts a heavy impact on final stainless steel product quality, with Mitsubishi-Hitachi Metals Machinery having earned stellar marks for its technical expertise in this area. Electrical items for the order will be produced by Hitachi, Ltd.

ACERINOX S.A. is the world’s second largest stainless steel manufacturer, and a company that turns out over 3 million tons of crude steel annually. The company owns and operates production bases in Spain, the United States and South Africa, with the Malaysia plant to be its first production site in Asia. Sojitz has done business with the ACERINOX Group for nearly 40 years, and to date has delivered a large number of stainless steel production equipment to ACERINOX including 10 SENDZIMIR cold rolling mills. Depending on how the plans for expanding the Malaysian operation develop, Sojitz hopes to land further orders for cold rolling mills there in the future as well. 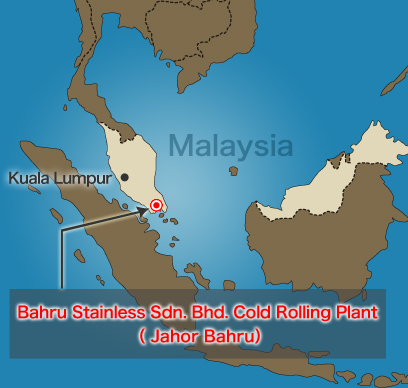