Sojitz Corporation is teaming up with  Sojitz Pla-Net Corporation (head office in Minato Ward, Tokyo; Toshihisa  Horikoshi, President), a wholly owned subsidiary active in the synthetic resin  business, to enter into capital participation in Taihan Techren Co., Ltd. (head  office in Seoul, South Korea), a leading solar power generation system  integrator. For Sojitz, this move will pave the way to enter the solar power  generation business in South    Korea. The company will be assuming a 34%  equity stake in Taihan Techren, with the value of the stock to be procured in  this participation valued at approximately 350 million yen.

Taihan Techren is a wholly owned  subsidiary of Taihan Electric Wire Co., Ltd., South Korea’s  second largest electric wire manufacturer. The company is a solar power  generation system integrator involved in projects that range from the designing  of solar power generation plants to procurement of materials, construction  works, power generation business agent operation, maintenance and more. As a  dedicated system integrator business entity, Taihan Techren is the leading company  in South Korea.  In August of 2008, meanwhile, Sojitz Pla-Net supplied Taihan Techren with  high-efficiency thin-film solar cell modules and inverters. With this order  serving as the main impetus, the Sojitz Group, based on its belief that the  South Korean market for solar power generation is set to expand from here on,  reached the decision to enter the solar power business.

In  South Korea,  the initiative was taken from early on to move in the direction of expanding solar  power generation. In October 2001, for example, the government introduced the  Feed-in Tariff (FiT) system, an incentive structure designed to encourage  purchases of renewable energy at fixed prices that has expanded worldwide with Europe as the primary focus. On the strength of this  move, South Korea has  emerged as Asia’s most advanced solar power  nation, with its market for that genre of power generation growing to become  the fourth largest in the world as well. In South Korea today, a total capacity  of approximately 300 megawatts (“mega” meaning “1 million”) of solar power generation  is already in operation, with plans calling for support to be given to another  200 megawatts of such power generation through the FiT scheme. The South Korean  government, operating under the Green New Deal launched in January of this  year, is set to inject the equivalent of some 38 billion dollars of capital into  environmental projects over the next four years. The public sector is engaged  in the development of highly energy efficient and eco-friendly buildings and construction  work of some two million green homes will be started in the near future.

From 2012, South Korea also plans to introduce  the Renewable Portfolio Standard (RPS), a mechanism that requires energy supply  companies to produce a specified portion of their power from renewable energy  sources. This announcement is prompting projections of further expansion of  solar power generation in the country over the years to come as well.

With  regard to the overall solar power generation market, hopes are high that growth  will not be limited to Europe, North America, South Korea and other  conventionally large markets. With the Japanese government also promoting its  own approach to this sector through the low-carbon revolution christened as the  “Cool Earth Partnership,” expectations are growing that the trend toward solar  will spread to the world’s developing nations as well. For its part, the Sojitz  Group is positioning solar power generation as a major priority in the business  fields to be newly cultivated under its “Shine 2011” medium-term management  plan. To support that vision, this April marked the launch of the “Solar Business Development Team,” a cross-sectional organization spanning all  Sojitz divisions (the team consists of 26 members). This unique new unit will  be spearheading the push to forge an integrated value chain from the upstream  to the downstream sectors of the solar power generation business. The goal is  to effectively mobilize the power and prowess of Sojitz as a general trading company  to further expand the sphere of this critical business category to a genuinely  global level. 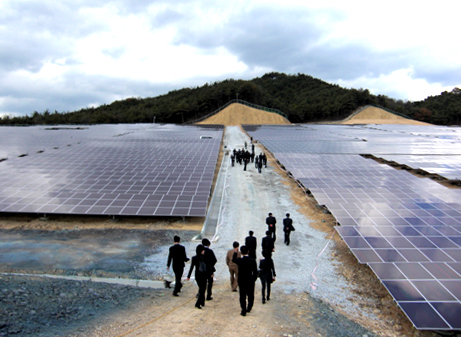