Sojitz Machinery Corporation (Head office: Chuo-ku, Tokyo; President and Representative: Satoshi Nagakubo), a wholly-owned subsidiary of Sojitz Corporation and SPS SYNTEX INC. (Head office: Kawasaki, Kanagawa; President: Eiichi Nishijima), a Sojitz Group company that undertakes the development and production of SPS (Spark Plasma Sintering) systems, have received an order for a large SPS system to be delivered to the French Atomic Energy Commission.The system ordered will be the largest of its type in Europe, with a maximum sintering pressure of 2,000kN (200 tons) and a maximum current of 30,000 amperes.The order received is valued at approximately 150 million yen, with delivery scheduled for April 2009. 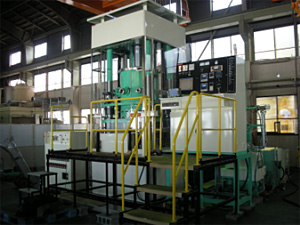 The SPS process is a sintering method used to synthesize and process a wide range of materials, such as metals and ceramics, by applying high amperage DC pulse current to sintering die and powder.Compared to conventional sintering methods, the SPS process realizes high-densification and uniformity in the process, with minimal grain growth.In addition, particles can be sintered in a very short time (about one tenth to one twentieth the time required by conventional methods).The SPS process consumes about one third to one fifth of the electricity required by conventional methods, and is therefore an eco-friendly energy-saving process.

As the SPS process enables grain growth to be restricted without using grain growth inhibitors, it has become the focus of attention in the area of development, utilizing nano-structure characteristics, of new materials such as high thermal conductivity materials applicable to personal computers, thermoelectric materials that generate power by applying heat, and functionally graded materials that are expected to be utilized in the aerospace industry.

The SPS systems manufactured by SPS SYNTEX, of which more than 300 units have already been delivered, are rapidly being adopted by universities and research institutes in and outside Japan for use in R&D and the manufacture of new materials such as metals and ceramics, as well as for commercial production.

The subject order is a part of an ongoing project to develop nanomaterials in France, in which project the French Atomic Energy Commission is taking the leading part, the awarding of which resulted from the high regard for the SPS SYNTEX sintering technology and the high value placed on Sojitz Machinery as a machinery trading company.

Along with Germany and Sweden, the central place for the study of SPS in Europe is held by France, where two national laboratories own two units of SPS systems provided by SPS SYNTEX with which they carry out research and development on new materials.Utilizing the Sojitz Group network, Sojitz continues to strive to expand the sale of SPS systems.