Sojitz Korea Corporation, a Korean subsidiary of Sojitz Corporation, together with Hitachi Ltd., has received an order from the Korea’s Public Procurement Service for a straddle type monorail system for Urban Railroad Line 3 in Daegu Metropolitan City.  The order received is for monorail vehicles and core system including signaling system. This will be the first urban transit monorail system to be introduced in South Korea.

The project for which the subject order has been awarded, is to construct a 24 km-long monorail system (30 stations are planned by the city), which will connect, via the central area of the city, the northwestern and the southeastern parts of Daegu Metropolitan City.  The city, which has a population of 2.5 million, has long prospered as a central city in southeastern Korea.  According to the Daegu City plan, construction is scheduled to start during the first half of 2009, with service to become available along the entire line in October 2014.

Urban Railroad Line 3 is planned to connect suburban residential neighborhoods with the inner-city area of leafy Daegu Metropolitan City with its many rivers, where urban agglomeration is advancing.  The monorail system to be delivered will provide maximum protection for the current city landscape, and low impact on traffic flow on roads under construction.  The decision to adopt straddle type monorail cars, which stride over and run above the guideway, was made as a result of considering the advantages of being able to utilizing the system as an urban excursion type tourism resource.  Receipt of the subject order comes as a result of the high praise Sojitz has received for its abundant experience in railway projects, and Hitachi's record of stable deliveries, as well as their high reliability, innovation and serviceability.

One of features of the monorail system is the adoption of automatic driverless train operation with an on-board attendant.  Further, the system includes a fire sprinkler system and an escape system that uses spiral shooters, as equipment to ensure passenger safety in emergency situations.  In addition, in order to prevent violation of the privacy of the surrounding residents, the monorail system is equipped with a mist glass system, the control of which is pre-programmed so that the side windows of the cars become fogged with mist when a monorail passes neighboring residential areas.

Sojitz Korea, as the prime contractor, will take charge of the project oversight.Further, Hitachi, Ltd. Seoul-based affiliate, Hitachi Railway Systems Korea Ltd. (Head office: Seoul, Korea; President: Toshihide Uchimura) will implement the project while serving in the area of system engineering project management.  The company will appoint Korean companies as partners, and will also promote the use of Korean-made products.

In Korea, there is significant agglomeration in metropolitan areas and big regional cities.  As a solution to traffic congestion, and to conserve the environment and save energy, plans are being promoted in many cities to introduce light rail transit systems, which offer great advantages in terms of construction costs and time.  Sojitz has  significant track record in overseas railway projects, mainly in the US market.  Utilizing its networks and its accumulated achievements, Sojitz will take part in railway projects around the world. 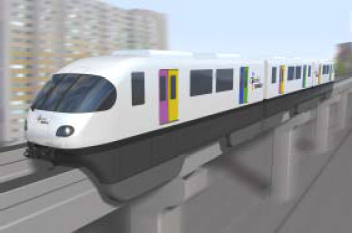