Sojitz Corporation will become the first leading trading company to enter into the domestic tuna farming business through direct investment. The fish farming company ‘Sojitz Tuna Farm Takashima Co., Ltd.’ will be established in Matsuura City in Nagasaki Prefecture. Farming of bluefin tuna will begin as early as this fall, with the first shipment scheduled for the end of 2010. Sojitz Tuna Farm Takashima will become a member of the local Shinmatsuura Fisheries Cooperative Association, and will farm tuna with the cooperation of Nagasaki Prefecture, which is actively involved in Japan Fisheries Cooperatives and in tuna farming. The company plans to sell tuna fish under a local brand name, and will contribute to regional developments.

Sojitz Tuna Farm Takashima will be capitalized at 300 million yen, all of which will be provided by Sojitz. Six 30-meter wide fish preserves will be placed at a distance of 500 meters off the island of Takashima, Matsuura City, Nagasaki Prefecture. Juvenile bluefin tuna, which take two years to grow into adult fish weighing over 30 kilograms, will be released into the preserves this fall. The company plans to release 5,000 juvenile bluefin tuna in the first year, and 10,000 in the third year. The ocean surrounding Takashima has a low typhoon risk, enjoys good water quality and is suitable for tuna farming in terms of water temperature, tides and water depth.

Sojitz handles 45,000 tons of tuna fish per year, which accounts for approximately 15% of the annual Japanese import volume of 300,000 tons. While fishery regulations are enforced and demand is increasing on a global scale, Sojitz pursues the development of a wide variety of ingredient supply sources, and undertakes the import of farm-raised tuna from suppliers in several areas such as Australia, Mexico and the Mediterranean Sea. The importance of fish farming, from which a stable supply of quality products is expected, is rapidly increasing. Sojitz aims to further develop its marine products business by undertaking the subject tuna farming. 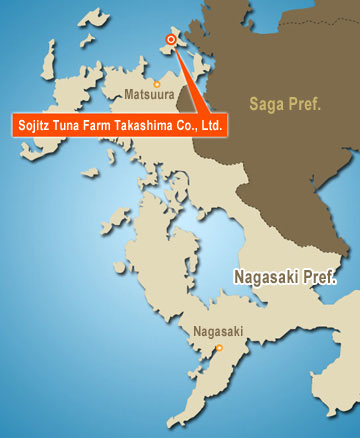