The location of the project is Rayong, Thailand, 150km southeast of Bangkok, and the total project cost is expected to be approx. $250 millions, of which, Sojitz invests in approx. $30M. Prior to Sojitz fs equity participation, Sojitz has been awarded as a full turnkey EPC contractor together with Korean engineering firm, Hyundai Engineering Co., Ltd. in December 2007. With this equity participation, Sojitz aims to successfully develop and complete the project on time within budget and thereafter will participate in the management of the project throughout its commercial operation.

The commercial operation of project is expected to be in October 2010. 90MW/h of the electricity is sold to EGAT, a national electricity company of Thailand in accordance with a 25-year power purchase agreement and 70MW/h is to a major local steel company under the same.

Despite the downturn in Thailand around 2000, now the Thai economy is growing tremendously mainly driven by the growth of automotive industries. With the growth of its GDP, the demand of electricity is expected to be growing by 7% p.a. going forward, and the demand would reach 40,000MW/h in 2015. In anticipation of this growth, SIPCO aims to expand its generation capacity as the Phase-2 project once feasibility is confirmed.

This project is developed under the governmental program called "Small Power Producer program", a program of which provides incentives with IPPs by buying electricity subject to such certain criteria as the effective use of energy produced by the plant.

With this participation as a touchstone, Sojitz aims to expand its activities in the power sector in Thailand and likewise in Asia and Middle East countries where we can contribute to the local economies by developing power generation projects.

The program being initiated and developed by Thai government in pursuit of the effective use of energy by highly efficient cogeneration system and renewable energy. The program starts from 1992 and stipulates the priority assistances to the power producers which use such fuels as rice hull and heat resources as ice making. 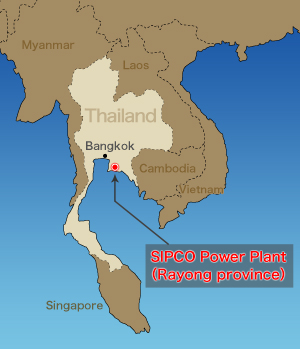