Promotion of its global resources development

Sojitz Corporation has signed an agreement to acquire a stake in the Basker Manta Gummy (BMG) oil and gas fields off the coast of Victoria, Australia.

The BMG oil and gas fields, located off the southeast coast of Australia, are large-scale fields where development is already being performed by Beach Petroleum Limited (40%), Anzon Australia Limited (40%) and CIECO Exploration and Production (Australia) Pty Ltd. Sojitz has acquired a 10% stake from Beach Petroleum, at a total cost of approximately 13 billion yen. 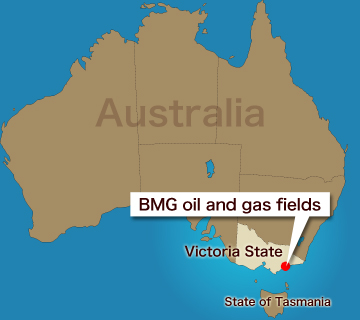 Since December 2006, the BMG fields have been producing crude oil from five development wells, with the use of the Floating Production, Storage and Offloading (FPSO) system.The current production output of 10,000 barrels per day is scheduled to double as a result of additional development.

Following stake acquisitions in the North Sea, the US Gulf of Mexico, South America, the Middle East and Africa, Sojitz will promote diversification of regional risks and aim to expand its well-balanced resources business through the subject stake acquisition in Australia, which is considered to be a low risk country with a properly maintained soft infrastructure in such areas as production/sales, law and taxation.

Furthermore, the company will advance its comprehensive resources development, such as its plan, currently under review, to develop a medium-scale LNG project using coal seam gas, as well as to develop other resources projects in Australia.