Sojitz General Merchandise Corporation (Head office: Minato-ku, Tokyo; President: Kenji Koyama), a Sojitz group company that is engaged in the sale of distinctive consumer products, will commence sales of the Autumn & Winter collection of the traditional British 'Admiral' brand of shoes from the middle of September. The collection will comprise eight models and will be available through approximately 200 shops, such as shoe stores and selected stores nationwide. Sojitz GMC aims to sell 20,000 pairs during the 2006 autumn/winter season.

In August 2005, Sojitz GMC acquired the exclusive Japanese sales rights for 'Admiral' shoes, for which brand the company undertakes consistent operations from in-house product planning, to design, production and sales.

'Admiral' was established in 1914 as a manufacturer of military uniforms for the British Royal Navy during World War One. The word 'Admiral' represents the 'Admiral of the Navy', and the logo for 'Admiral' shoes that has been passed from generation to generation is based on a motif of a yellow emblem sewn on a military uniform sleeve as worn by an admiral of the Royal Navy. After the First World War, the company followed the path of a sportswear manufacturer. Its golden years were between the 1970s and the 1980s, when it was involved in the supply of official uniforms to the England and Manchester United football teams. In Japan, the 'Admiral' brand was in its prime back in the 1970s and 1980s, and is now positioned as a brand that gives football fans a very nostalgic and retro-flavored image. 'Admiral' brand shoes invoke nostalgic memories of childhood when one was given one's very first favorite pair of sneakers, and give one 'a feeling of history and tradition'. 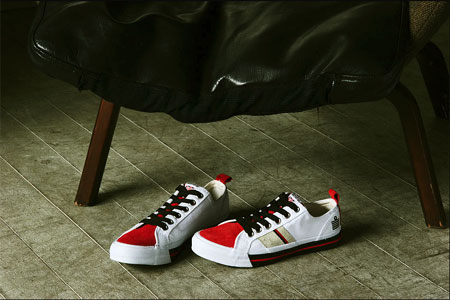