EBISTRADE, Inc. (Head office: Chiyoda-ku, Tokyo; President: Ryoji. Terai), a Sojitz Group new business incubator, has received the first delivery contract from overseas for its 'Bottled Liquid Checker', which enables instant determination of whether the liquid inside beverage containers such as PET and aluminum bottles is flammable. The contract includes the delivery of a total of six units of equipment, four units of which will be delivered to the Great Hall of the People (equivalent to the Japanese Diet Building) and two units of which will be delivered to the Shenzhen police station. Starting with the sales in China, EBISTRADE will focus on developing markets overseas, and aims to achieve annual sales of 1,000 units.

The subject bottled liquid checker was developed by Tokyo Gas Co., Ltd. and is marketed by EBISTRADE. By placing a beverage container in the prescribed position, the equipment enables instant determination of its contents without the necessity for a sample of the liquid inside to be taken. In addition, the equipment uses no chemical substances or radiation such as x-rays, both of which require careful handling, and thus enables the carrying out of inspections without placing an excessive burden on users. Demand is expected to come mainly from public transportation systems and important facilities for their use in the screening of baggage.

EBISTRADE has been engaged in the sale of the bottled liquid checker to domestic airports since November 2004. The company has supplied a total of 270 units to 63 airports, covering nearly every airport in Japan, including Haneda Airport and Narita International Airport. Great emphasis has been placed on the risks from the liquid inside beverage containers since the attempted bombings in London in August 2006. As can be seen from the fact that the carrying of beverages onboard is not permitted overseas, passengers are becoming inconvenienced, and that inconvenience is cited as a matter of concern. In response to the expanding overseas demand for liquid substance inspection, EBISTRADE will focus its efforts on overseas sales of the bottled liquid checker. 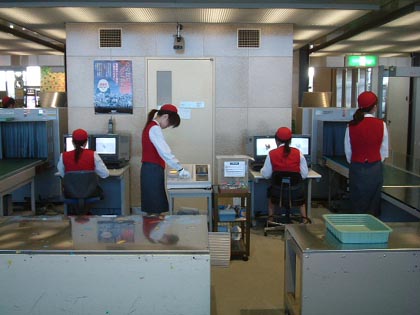 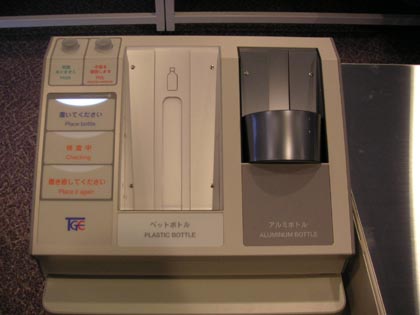 After merely placing PET bottles and glass bottles on the left side and aluminum bottles on the right side in the prescribed positions, the bottled liquid checker takes only a few seconds to determine their contents. The red LED comes on when the container holds flammable liquid such as gasoline, ethanol, kerosene, and paint thinner, and the blue-green LED comes on when the container holds beverages such as juice, water, beer, sake and wine.