Sojitz to increase its interest through execution of preemptive right

Since 1994, Sojitz Corporation has been participating in the development of the Minerva coal mine in Australia. The company will increase its current interest by 15%, from 30% to 45%, at a cost of about 3 billion yen, and will strategically strengthen its production and marketing infrastructure in the booming coal business.

In response to a plan by a South Korean consortium consisting of Korea Resources Corporation and others to acquire 15% of the 70% interest held by Felix Resources, Sojitz has decided to execute its preemptive right and has notified Felix Resources accordingly.

The Minerva coal mine commenced production of high-grade thermal coal in July 2005, as originally planned. The mine, with marketable reserves of about 26.8 million tons of coal, is currently producing coal at its full production capacity of about 2.5 million tons per year.

Partly as a result of the recent active demand for thermal coal in the Asian region, the thermal coal produced by the Minerva coal mine, at its production capacity of 2.5 million tons per year, is coming close to being sold out. In view of this circumstance, and also from the standpoint of securing the equity coal for its customers mainly in Japan, Sojitz has determined that it would be appropriate to execute its preemptive right.

Sojitz has already acquired the exclusive marketing right for Japan for the high-grade thermal coal produced by the Minerva coal mine, as well as holding a marketing right in Taiwan. Through the increase in its interest, the volume of equity coal to be held by Sojitz is expected to increase by 380,000 tons to a total of 1.13 million tons per year. 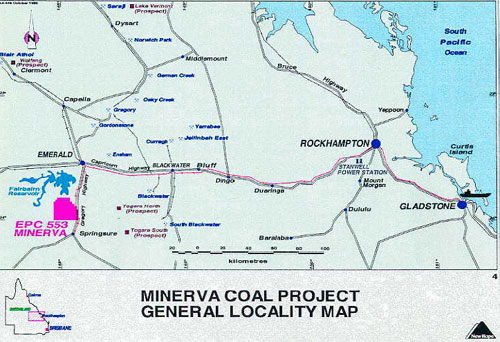