Based on the Development and Production Sharing Agreement with the Qatari government, the concession for the Block 1 field, offshore southeast of Qatar, was transferred to QPD, which was established in September 1997. Transition to the development stage for commercial production was declared in June 2003 and production of crude oil has begun on March 13. The crude oil produced will be shipped from Halul Island in Qatar as Qatar Marine Crude Oil and is scheduled to be brought into Cosmo Oil refineries. The initial production volume is planned to be 6,000 barrels per day, and peak production volume of 10,000 barrels per day is expected to be reached by March 2008 as a result of additional development.

From the beginning of production in this project, 'sour gas injection' process has been carried out at sea, with which process the entire volume of associated gas generated during drilling is injected into the oil reservoirs instead of being burned and released into the atmosphere. This is the first time for a sour gas injection system to be introduced to a drilling site in Qatar which will enable the most environmentally-friendly operations in the country. The project is additionally characterized by the Japanese company Cosmo Oil serving as the sole operator.

Sojitz has already participated in the Ras Laffan LNG Project in Qatar. The commencement of oil production will make Sojitz the only Japanese company participating in both gas and oil production projects in Qatar. Sojitz will utilize the experience, techniques and human resources that it has cultivated to date, and will continue to participate in the fields of energy and resources. 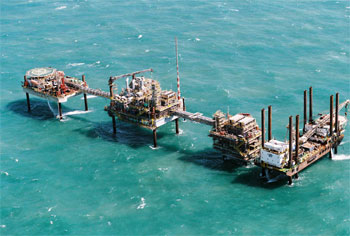