Becomes the First Japanese Company to be Awarded an Order for Vietnam,with the Largest Order Volume

Whereas Vietnam boasts a high literacy rate of approximately 90%, the country is in a situation where there are concerns over a decline in the standards of education and knowledge, and over a shortfall in human resources to respond to the market economy, against the backdrop of economic, social and cultural differences between North and South Vietnam, restrictions on the transmigration of citizens and restrictions on access to information from other countries that had been imposed until recently. In order to promote the modernization of society and its transition to a market economy, it is essential that the necessary information is conveyed to citizens in an effective and extensive way. Bearing in mind such circumstances, the construction of the television broadcasting center in Hanoi will enable VTV to create more TV programs such as news, dramas and educational programs, and to broadcast programs with a dramatically clearer picture than has previously been possible.

The television broadcasting center, where the broadcasting equipment that Sojitz will deliver is to be installed, will be a five-story building with a total floor area of 32,000 square meters. It will be the largest comprehensive media center in Asia, equipped with the latest facilities comprising of five studios, a news center, an editing/production room and a sound room. Further, most of the broadcast equipment and appliances to be delivered will consist of Sony and NEC products. This will mean that the Vietnam Television station will be equipped with state-of-the-art Japanese shooting and editing equipment.

The Japanese government has provided the whole project with a yen loan package totaling 20 billion yen, as funds for the construction of the television broadcasting center, and is giving full cooperation to the modernization of TV broadcasting in Vietnam. 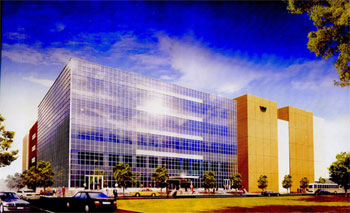