The alliance consisting of Sojitz Corporation of America, a US subsidiary of Sojitz Corporation, and Hyundai Automotive Group's rolling stock manufacturer Rotem Company (Head office: Seoul), has received an order for 104 units of rolling stock for a new suburban train from the Southeastern Pennsylvania Transportation Authority (Head office: Pennsylvania; abbr.: SEPTA). The contract will be between SEPTA and United Transit Systems (Head office: Pennsylvania; abbr.: UTS), a consortium of Sojitz Corp. of America and Rotem Company. This large-scale order, with a total contract amount of approximately \32.5 billion (US$277 million), includes an option for an additional 16 units of rolling stock. Receipt of this order resulted from the high value placed on Rotem Company's competitiveness, and on the project management capabilities and past achievements of the Sojitz Group in the US railcar market. 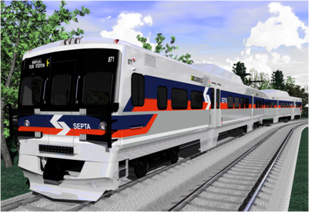 The new commuter train for which the order has been received.

SEPTA is the fifth-largest public transportation authority in the US, with up to 300 million passengers per year. The new commuter trains, for which the order has been awarded, corresponds to the demand to replace old electric trains and to the upcoming rider-ship increase. State-of-the-art propulsion control systems manufactured by Mitsubishi Electric Corporation will be adopted.

Except for 3 prototype units, final assembly of all the commuter trains is planned to be performed in Philadelphia, in compliance with the 'Buy America' regulation. Rotem Company has already signed a leasing agreement with the City of Philadelphia for an area of approximately 100,000 square feet to accommodate a plant, and will commence final assembly in the latter part of 2008. Delivery is scheduled to be completed in 2010.

Since the 1980's, Sojitz has delivered over 1,000 units of rolling stock to major cities in the US East Coast, including deliveries made to SEPTA. Taking advantage of the tie-up with Rotem Company, Sojitz plans to continue focusing on expanding its sales of rolling stock across North America.