Realization of the Smallest Body, and Adoption of All Stainless Steel Grinding Chamber for the First Time in the Industry

Sojitz Corporation, HASEKO Corporation and INAX Corporation have collectively added to the ‘New Eco-poser 530' series garbage disposal system for condominiums, which system boasts one of the best track records for adoption since its release in 2002, with the industry's smallest class-size high performance disposer ‘New Eco-Poser 530 - Minipo (*1)', which has been reduced in height by over 30 percent compared to existing products. Commercialization of the ‘New Eco-Poser 530 - Minipo' has recently been realized.

In addition to its compact body, the ‘New Eco-Poser 530 - Minipo' is equipped with new features such as an all stainless steel grinding chamber (*2). The product will be actively promoted to newly-built condominiums as one that serves customer needs for clean and comfortable condominiums. For a start, introduction of the ‘New Eco-Poser 530 - Minipo' is planned at newly-built condominiums in one premise in the Tokyo metropolitan area (550 housing units) and at two premises in Chiba Prefecture (940 housing units)

*1. A term coined from the word ‘mini' and ‘disposer'.
*2. All stainless steel-made, except for the vibration-proof joint part. 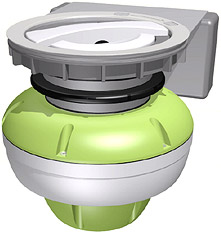