Sojitz Corporation, in collaboration with Nakajima Kogyo (Head office: Shiroi-shi, Chiba-ken; Representative: Yoshihiro Miura) under the NIHON KANKYO GROUP, which undertakes the treatment of industrial waste, will launch a recycling power generation business that uses industrial waste such as food waste and waste plastic as a fuel. Sojitz's idea of striving for an entry into the fields of industrial waste disposal/new energy business corresponds with the NIHON KANKYO GROUP's idea of striving for a strengthening of its recycling systems.

In December 2003, jointly with Nakajima Kogyo, Sojitz established Eco Energy Japan Corporation (Head office: Shiroi-shi, Chiba-ken; Representative: Norio Yamazaki), and holds a 51% share in the company. Eco Energy Japan?fs total project cost is approximately 1.8 billion yen, and the company?fs industrial waste intermediate treatment facility is now under construction with commercial operation targeted for August 2006. This is the first case for a sogo shosha to make a full-scale entry into a recycling power generation business that uses industrial waste as a fuel.

In addition to accepting, on trust, waste disposal operations from industrial waste generators in the Tokyo metropolitan area, Eco Energy Japan will generate power using waste heat generated in the incineration of the wasted received. Their incineration capacity for disposed waste will be 96 tons per day (24 hours), which will be the largest among the private sector players, and its corresponding power generation capacity will be 1,250 kilowatts. About two-thirds of the power to be generated will be sold to power companies, and Eco Energy Japan plans to post annual sales of approximately 1 billion yen, including trustee fees for incineration disposal. Since it uses industrial waste as a fuel, the facility will contribute to environmental conservation and to the securing of resources. The company aims to develop business in the Tohoku region, in addition to that in the Tokyo metropolitan area.

The facility consists of a crushing facility and a power generation facility. Pretreatment of bulk waste is conducted at the crushing facility, which is able to treat over 40 tons of waste plastic and over 60 tons of wood waste per day (8 hours). At the incineration/power generation facility, incineration is conducted at a high temperature of over 1,000 degrees Celsius, enabling the incineration of a wide range of low- to high-calorie waste, such as sludge, animal and vegetable residues, solid animal waste, waste acid, waste alkali, waste oil, waste plastic, paper waste, wood waste and waste rubber. In addition, exhaust gas will be treated by recovering waste heat with the use of an efficient waste heat boiler, followed by operations to prevent recomposition of dioxin, etc., and to eliminate such substances. Thus, sufficient consideration has been given to ensure that the facility is environmentally-friendly. 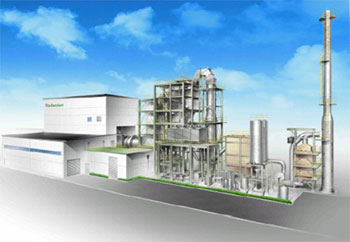